A Blog of Bosh

In a previous post, The natural History of the Wheelbarrow, I published a series of images in which a woman was carried around in a wheelbarrow, usually by a loving husband or servants.

The first image, however, showed a devil carrying souls to hell in a wheelbarrow; the same MS ― ‘Taymouth Hours’, England (London?), second quarter of the 14th century, Yates Thompson MS 13, f. 139v ― has a similar image in which a “lecherous woman” is pictured so that she herself looks like a wheelbarrow while she is led to hell by demons:

The wheelbarrow as a means of transport to a place of punishment was still well alive in the 16th century, when this print was published:

READ: Research in English At Durham

Many people find music hard to read. How, then, do you set about deciphering music and song lyrics written 500 years ago in a timeworn medieval manuscript? Timothy Glover (UCLA) decodes the secrets of an intriguing early book, in a post derived from his recent article in Postgraduate English.

One of the treasures of the Bodleian Library is the fifteenth-century Selden Carol Book. It contains upwards of thirty songs with music in a variety of genres, including Latin antiphons, a hymn, and carols in Latin and English. The manuscript is thought to have been made in a monastery or cathedral – contexts which would have required repeated performances of religious music.

But something strange happens at the end of the book:…

It reads like a horror story. In 1964, the New York rare book dealer Philip Duschnes (d. 1970) bought and subsequently broke a splendid medieval Bible produced in early-fourteenth-century Paris (Figure 1). Every page is adorned with exuberant decoration, usually with gold leaf. The manuscript also contains numerous historiated initials, like the letter S above. With so much beauty on each page, to Duschnes the manuscript must have seemed ideal for breaking and selling by the leaf. In 1965, he began offering individual leaves for sale in his catalogue 169, stating that others from the same manuscript were available. Cut to order.

Duschnes had done the same with other manuscripts, such as the Beauvais Missal (read the full story here; watch this lecture by Lisa Fagin Davis). In 1942 he sold the half-gutted missal to Otto Ege (d. 1951), another infamous manuscript cutter, who added the remains to his…

At its very heart the medieval book is a vehicle of information. It was an expensive receptacle for text, which was poured onto the page by the scribe, and retrieved by the reader. As strange as this may sound, as a book historian I have limited interest in the actual text found on the medieval page. My job is to look at books, not to read them: knowing author, genre and purpose often suffices for what I do. Very different, however, is my attitude towards words found in the margins, placed there “extra-textually” by scribes and readers. Here we may find information about the production circumstances of a given manuscript and the attitude of scribes or readers towards a text. In most books, there was ample room  to add such details, because on average a stunning fifty percent of the medieval page was left blank. It is in this vast emptiness, so often overlooked in editions of texts, that we may pick up key…

Liberty Bell. National Park Service. The line from the King James Bible is near the top of the bell.

Perhaps the most surprising fact about the Liberty Bell is that it was first cast many years before the American Revolution, in 1751?not in 1776, as one might assume. Pennsylvania’s colonial assembly ordered a bell for its state house, specifying that the London company making the bell place on it a passage from the King James Bible, Leviticus 25:10: “Proclaim LIBERTY throughout all the Land unto all the Inhabitants thereof.” That phrase was apparently a reference to the liberties established in the Pennsylvania colony by its Quaker founder William Penn, including religious freedom and the powers of the legislative assembly. Anti-slavery advocates later gave the Liberty Bell its name based on the biblical words, and used it as an abolitionist symbol starting in the 1830s.

As explained by the National Park… 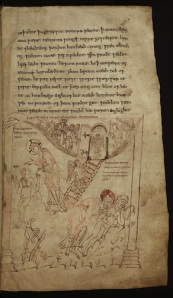 I really wish that I had been there when Bodleian Library MS. Junius 11 arrived at the Folger Shakespeare Library. Dating from around 1000 CE, this manuscript contains Old English verse adaptations of Genesis, Exodus, and Daniel. These biblical poems were originally thought to have been authored by the seventh-century poet Cædmon. Thus the manuscript is often referred to as the “The Cædmon Manuscript,” though the true author or authors remain unknown.

The page that is being highlighted in the Folger’s Manifold Greatness exhibition (first image, at left) presents the creation of Eve. On the right side of the drawing God takes a rib out of Adam’s side. On the left, God holds the hand of newly born Eve.

The image from MS. Junius that I personally find captivating is the depiction of Noah’s ark as a kind of Viking ship (the second image in this post, at right). At… 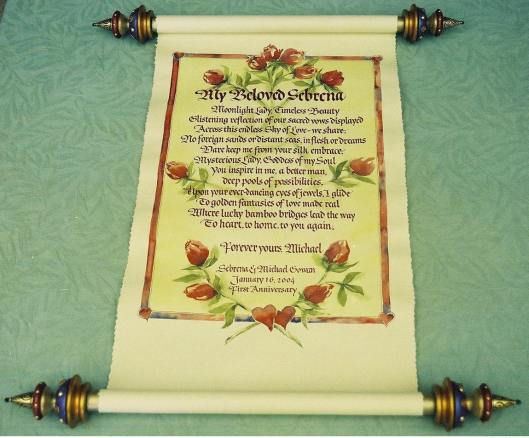 This is a scroll 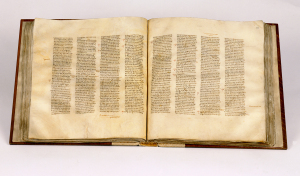 This is a codex 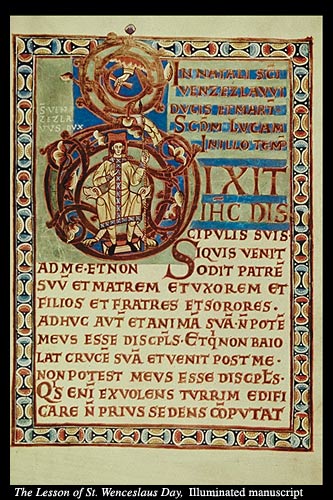 1) It was developed by the Romans the codex derived from wooden writing tablets and was a gradual replacement for the scroll. This was to keep everything more organized and you don’t necessarily need the order.

2) Random access you can open to any page and start anywhere you like, as in books or magazines. For scrolls you could only have sequential access because each scroll was written in sequential order so if you were missing one scroll you were missing a huge chunk of information.

3) Illuminated Manuscripts were made with stronger paper usually made out of animal skins and had extremely detailed and intricate illustrations. A codex was made out of weaker paper and had no illustrations or intricate borders or texts.

4) Craftsmanship is the skill you acquire and put into your work. It is your level…

A speech/lesson I put together for newcomers in the SCA. Different pieces of advice that came from different people at different times that I put together into one place. I’ve given this speech/talk many times over the past years.

So, you’re new to the Society for Creative Anachronism (SCA), and you want to do it all! Well, come check it out, find out what you like and explore. You might find something you like that you never thought you would. But first, a word of advice.

In your first year DON’T.

DON’T attach yourself to someone as in an apprenticeship or squiring or other such thing.

DON’T register your name. Once you have registered it you are more or less stuck with it. Once people are used to calling you something they’re gonna…

Etiquette rule for titles is that you used the highest title the person has.  Period.  If you want or need to include other ranks or awards in the introduction, you include them AFTER the person’s name.  Title stacking is incorrect, both in period and in the modern world and just sounds goofy anyway.  We hear it done incorrectly in the SCA so much that folks are used to the way it sounds and tend to think that it is correct, but when in doubt, try transferring SCA practices to the modern world.  For example, Dwight D. Eisenhower:  He is referred to as “President Eisenhower”…   not “President General Eisenhower” which is the modern world equivalent of saying “His Majesty, Sir Stick Jock”.

Or to use a more analogous example – Prince Charles: If we used the SCA style of (incorrect) title stacking he would be: “Prince, Prince…

… has a certain script.
… shows a certain activity.
… is from 9th century Egypt.

If you like pre-1600 manuscripts or are researching a historical activity pre-1600 you have done or asked some version of these questions. We all have. And for many of us we had no idea where to look or how to look for these things until someone kindly shared with us those resources. I have asked these questions many times myself and today I’m sharing with you what was shared with me.

My resources for looking up and finding things in manuscripts in the pre-1600 world.

My go to resourse is the “Digital Scriptorium“. This resource is run by UC Berkley and the Rare Book Manuscript Library of Columbia University. In their own words, “The Digital Scriptorium project, funded chiefly by grants from the National Endowment for the Humanities, was originally a joint…